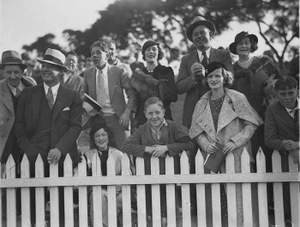 I remember sitting on the hill boiling in the late winter sunshine then later freezing as the temperature dropped and the moisture rose. We sat on bits of plastic or I think garbage bags. If I went to the toilets, there were always die-hard fans hanging about there. I think, looking back, that they were drunk or pickled as mum would say. They’d eye me as I stepped over people’s feet looking for the toilet block, which wasn’t hard to find because of its smell. I would only be in there for the barest amount of time. Then return, past the kiosk selling meat pies and cokes, neither of which we ever bought.

My father had taken me at 10 and Lynda at 13. She had large scrap books of hand colored clippings of the players and teams. This was before movie or singing stars. She kept these books in pristine condition and they were a work of art. I was jealous of them, but too impatient to do such work.

Most games were either a whitewash and we would leave early to catch the train back to Revesby. Or it would be a close shave or the hooter would sound as we walked back towards the exit gates. We always seemed to be in a hurry to leave. The crowd was strong and thick and I was short. I could never see the exciting last bit, as I couldn’t see over the crowd’s heads when they stood up to cheer. We never booed and considered it quite Bogan to do so. The maddest we got was to call out lolly legs when the opposition’s goal keeper was lining up the kick. I swore it worked.

The crowds on the hill were always polite and I never remember any trouble. I didn’t realize that Redfern was working class and in parts very poor, until my university days when I saw homeless people yank palings off the fence and put them – alit – into 44 gallon drums to keep warm.

Of course, before global warming we had real rain in the winter. Many times we would set off with plastic raincoats and umbrellas. It was so torrential and the ground so sodden that water would run under and over you and we would be so cold. I don’t remember any hot food or drink with us. In fact I only remember thinking that South’s had better win to make it worth the effort. The plastic coats always crumpled up to a ball and I longed for the time at I would get a real coat of nylon when I was in Year 7.

We went to one semifinal and it was sellout. There was a huge crowd and wall-to-wall shouting, all good natured. When we went to leave, it was early to get out the gate and I was terrified of being swept along with the crowd and not staying with my father. Then I would hear cheers and never know who scored or who was winning! He kept a hold of my arm but the crowd surged out onto the footpath and I would lose sight of him. Eventually we would meet up outside the gates. Then begin the long trudge home in the cold to the station.

Alison Miller is a teacher whose love of words has led her to write for as long as she can remember. She has been published both online and in print and has won several awards for both poetry and prose. Alison’s interests include travelling and gardening and she indulges the latter in her quarter-acre garden in the Sydney suburb of Revesby, where she lives and where she raised her two grown-up daughters.