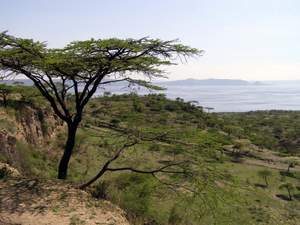 Our aid project in the Rift Valley coincided with the last years of Emperor Haile Selassie. As we had no intimation of revolution, our small team of water resources and agriculture experts based itself in the lakeside town of Awasa, about halfway from Addis Ababa to the Kenyan border. Being the only bachelor in the group, I lived in a sprawling hotel on the edge of Lake Awasa itself, the “rooms” being rondavels.

Before any organised field work got started I was introduced to a missionary who demanded to know where to dig a new well, as the existing one had failed in the prevailing drought. The current famine in Ethiopia was primarily created by years of low rainfall, lowering ground water levels. It was somehow assumed that our project would solve all problems at once, and I was the first to feel the pressure of expectation. The missionary was unimpressed by my explanation that I could not see underground any more than she could, and that to answer her question would require a drilling rig. “So much for experts!” she shouted at me in front of a number of her flock, .  As a young man on his first overseas project, I felt humiliated and depressed – but then she had probably encountered more “experts” than I had. Morosely, I returned to the hotel rondavel and threw rocks at the huge crows that scared even the hotel cats.

Progress on the project was painfully slow, unsurprising to the experienced men who settled into a dreary routine of consuming much thick sweet coffee while filing copious expenses claims. Eventually I was dispatched with a Land Rover crammed with beautiful, state-of-the-art rain gauges which were to be installed around the extensive project area. I quickly got the feeling that Tekele, my middle-aged driver, was less than happy about taking instructions from a novice like me, as he maintained a sullen silence while driving flat out over broken and stony roads. The rain gauges crashed around and dust clouds obscured the impressive Rift Valley landscape.

Typically, when we arrived at a village designated for a rain gauge we were surrounded by mobs of noisy people who followed me around while I was deciding where to locate the gauge. The excited villagers were delighted by the gleaming brass and copper cylinder that I lovingly secured in the ground with a circle of cement. My driver was supposed, I thought, to explain what this was all about, but I was unsure what he said. However, it stimulated gales of laughter, and my suspicions were confirmed when I returned for a tool left behind to find that the gauge had already been dug up and was about to be beaten into cooking pots. I could only hope that this would be an exception, and continued on my dispiriting mission.

One night I stopped by at the home of an elderly Englishman living alone near the Kenyan border. The little farm was in a bad way and his “boys” appeared to treat him, I thought unfairly, as a figure of fun. I suppose he and his twirled moustache were an anachronism, but he had nowhere else to live. Long gone were the happy days of the Kenya of his youth. In traditional, old colonial fashion we had a “sundowner” on the rickety verandah and then spent the evening drinking whisky while I heard about his life in Africa. I readily agreed to deliver a letter to his wife, who was living in Addis Ababa, the next time I was there. The following morning, remembering my missionary lesson I declined to suggest where a new well might be dug, depriving the “boys” and Tekele of amusement. The old man waved me goodbye as the Land Rover bounced away along the dusty track.

We were now in a remote area far from sealed roads but Tekele he apparently believed that driving fast meant using less fuel, which was getting low. This punishment of the vehicle had inevitable consequences and, near a small hilltop village called Cambo, the wheel nuts came off a rear wheel and we ground to a screeching halt in a cloud of dust, leaving the wheel behind. This inevitably attracted a giggling bunch of locals. Tekele discovered some English and swore loudly about useless British vehicles while backtracking through the thorny scrub to look for missing wheel nuts.

I walked on to the village which was merely a circle of mud huts around a hardened earth square. There were no shops, but I was surprised to see one of the larger huts claiming to be a “hotel”. Through a bead curtain I ventured inside. In the early evening gloom several men could be seen seated along the cracked mud walls, muttering bleakly. This seemed to be a sort of bar, as a woman stared at me from behind some planks propped up by plastic beer crates. Obviously, a foreign visitor was a novelty. Without comment she handed me a bottle of warm lager and I slumped down on a wall bench against the wall.

When my eyes had become accustomed to the gloom, I noticed on a shelf above the bar a line of bottles, obviously untouched for years. I could just make out the label of a popular Scotch whisky, so attempted to discover how they came to be in such a remote place. One of the patrons, who had some English, told me the bottles had been donated by Allied troops camped nearby during the Second World War. The gift did not seem to have to have appealed to the villagers, having languished untouched for over thirty years while disappearing under layers of dust and spiders’ webs. Or perhaps they had never tried it. So I paid the woman to open a bottle and all six of us had a tumbler of Scotch. It was perfectly good, and in the villagers’ fashion I knocked it back in one. Another was broached and soon we were toasting 18th century explorer Jimmy Bruce, Lieutenant Colonel Orde Wingate and Emperor Haile Selassie, whose face looked down on us from a dark corner. A sullen silence had turned into a happy band of men, thanks to the British Army.

Before the sudden tropical night descended I was glad to see the Land Rover, on four wheels again and parked in a corner of the square. I re-joined the hotel’s merry men and bought them another bottle. Later I was shown to my “room”, which was a bare hut at the back with no facilities, not even water. Before attempting to sleep on a rough bench, I located Kohoutek’s Comet amid the blazing stars, knowing where to look from an article in Time magazine which I had read while at Awasa. It made a memorable end to a remarkable day.

In the morning the last rain gauge was being assessed by the usual band of curious villagers, the rainfall record sheets already blowing in the wind. With the wheel secured, we drove north to Arba Minch, a town large enough to have a petrol station and a reasonable chain hotel. In a state of weary depression, I decided to stop on the way at a tej bet, or mead shop, for a flask of traditional Ethiopian mead. The bet owner circled around the hut, refilling flasks without being asked – a formidable woman wielding a huge blackened kettle. We drove from Arba Minch to Awasa in one day, despite the possibility of further damage to our trusty Land Rover. A ghostly moon reflected off the lake on our return, and there was no mail from England for me.

A few weeks later, back in the UK, I read that popular resentment had instigated a communist revolution. Haile Selassie and his court had disappeared and the country was on the brink of a new era. 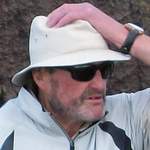