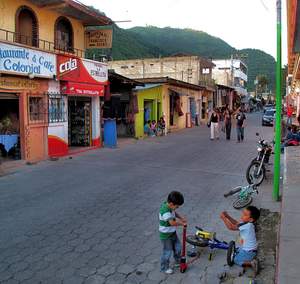 The ridges throw their green edges in sharp relief against the winter sky. The blue shadows of mountain peaks rise between foreground and background, vague monsters of majesty in the distance. Sheer drops of hundreds of feet above and below, with a road that hangs between cliff and cliff, twisting as sinuously as a mountain snake, and then….

Then you break out of a winding turn and Lake Atitlán unfolds in front of you.

It’s a rolling basin, full of small, choppy caps sparkling in the intensity of the sun and falling into the edges of the mountains in a tumble of fiberglass boats and crooked plank docks. Venders sell churrascos and tortillas against the stone-edged steps and, higher up, the adobe and block walls of homes and shops line the uneven pavers, climbing on and on, until the mountain takes over. Green patches of fields and trees vie with the brown of tilled earth and sheer cliffs where nothing alive could grow, and the occasional bare strip of dirt, where a landslide tore off everything living and tossed it below.

This is Panajachel, Guatemala.

We came down from the capital by “chicken” bus, slang for the old school buses used in public transportation in Central America, where you sit hip-against-hip with perfect strangers and guard your bags carefully. It has taken us nearly five hours, over bumpy roads and through construction zones. Stepping out onto the warm pavers is like
docking at a home port. My legs are unsteady but my satisfaction with the world in general improves immediately.

We walk the few blocks to the hotel where we have reservations. It’s a quiet, house-like place, with no more than a few rooms, and an adjoining café where we will be served breakfast tomorrow morning. Our room is sparse but sufficient for our needs and even includes a television and a bathroom with a water heater. I haven’t showered with a water heater in a good five months, and it’s hard to get out again.

We go out to explore. The narrow, twisting roads are full of shoppers and tourists and tiny booths full of handmade bracelets and keychains and very modern sunglasses and printed shirts. You don’t want to make eye contact with the sweet older ladies peddling their wares, because then you can’t get rid of them – sweet or not – short of a pry bar or
dynamite

There’s actual English being spoken here and I stand beside a group of chatty American tourists and eavesdrop, feeling suddenly very Guatemalan. These aren’t my people; not anymore. My people are the dark-skinned ones clicking like crickets and pointing with their chins. I know what they’re saying, even when they’re not saying it,
and I can click and gesture right back. The Americans – they’re big and white and loud. I walk away quietly and pretend I don’t speak English after all.

I hear French too and German, and plenty of Spanish dialects – including the boatman’s, whose Spanish is worse than mine. I’m guessing his first language was K’iche or Kaqchikel. We take a boat ride across the lake to Santiago, along with a group of Mexican young people and a Spanish couple. I laugh at the accents behind my hand. A year in this country and I’m already a language snob.

Afterwards, I sit in the back of a restaurant-and-garden as the sun sets over the mountain peaks, and dream of a day when I can come back with a laptop and shut myself away for a little while. It’s a writer’s paradise in this little corner of the world, almost untouched since the time of the Conquistadores. 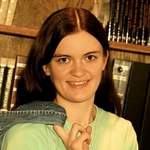 Melissa Kirby is the freelance author and editor of numerous magazine articles and web pages, with two books for sale on amazon.com and smashwords.com. She wrote her first stories before she could spell and finished a full-length novel at the age of thirteen. She owns her own business copy and content company, and is working on her third novel, a murder mystery entitled Guardian Black.