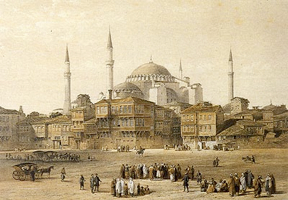 There lived in Constantinople an old Hodja, a learned man, who had a son. The boy followed in his father’s footsteps, went every day to the Mosque Aya Sofia, seated himself in a secluded spot, to the left of the pillar bearing the impress of the Conqueror’s hand, and engaged in the study of the Koran. Daily he might be seen seated, swaying his body to and fro, and reciting to himself the verses of the Holy Book.

The dearest wish of a Mohammedan theological student is to be able to recite the entire Koran by heart. Many years are spent in memorizing the Holy Book, which must be recited with a prescribed cantillation, and in acquiring a rhythmical movement of the body which accompanies the chant.

When Abdul, for that was the young man’s name, had reached his nineteenth year, he had, by the most assiduous study, finally succeeded in mastering three-fourths of the Koran. At this achievement his pride rose, his ambition was fired, and he determined to become a great man.

The day that he reached this decision he did not go to the Mosque, but stopped at home, in his father’s house, and sat staring at the fire burning in the grate. Several times the father asked:

And each time the son answered:

He was very young; he could not see.

Finally, the young man picked up courage and gave expression to his thoughts.

“That is very easy,” said the father.

“And to be a great man,” continued the son, “I must first go to Mecca.” For no Mohammedan priest or theologian, or even layman, has fulfilled all of the cardinal precepts of his faith unless he has made the pilgrimage to the Holy City.

To his son’s last observation the father blandly replied: “It is very easy to go to Mecca.”

“How, easy?” asked the son. “On the contrary, it is very difficult; for the journey is costly, and I have no money.”

“Listen, my son,” said the father. “You must become a scribe, the writer of the thoughts of your brethren, and your fortune is made.”

“But I have not even the implements necessary for a scribe,” said the son.

“All that can be easily arranged,” said the father; “your grandfather had an ink-horn; I will give it you; I will buy you some writing-paper, and we will get you a box to sit in; all that you need to do is to sit still, look wise and your fortune is made.”

And indeed the advice was good. For letter-writing is an art which only the few possess. The ability to write by no means carries with it the ability to compose. Epistolary genius is rare.

Abdul was much rejoiced at the counsel that had been given him, and lost no time in carrying out the plan. He took his grandfather’s ink-horn, the paper his father bought, got himself a box and began his career as a scribe.

Abdul was a child, he knew nothing, but deeming himself wise he sought to surpass the counsel of his father.

“To look wise,” he said, “is not sufficient; I must have some other attraction.”

And after much thought he hit upon the following idea. Over his box he painted a legend: “The wisdom of man is greater than the wisdom of woman.” People thought the sign very clever, customers came, the young Hodja took in many piasters and he was correspondingly happy.

This sign one day attracted the eyes and mind of a Hanoum (Turkish lady). Seeing that Abdul was a manly youth, she went to him and said:

“Hodja, I have a difficult letter to write. I have heard that thou art very wise, so I have come to thee. To write the letter thou wilt need all thy wit. Moreover, the letter is a long one, and I cannot stand here while it is being written. Come to my Konak (house) at three this afternoon, and we will write the letter.”

The Hodja was overcome with admiration for his fair client, and surprised at the invitation. He was enchanted, his heart beat wildly, and so great was his agitation that his reply of acquiescence was scarcely audible.

The invitation had more than the charm of novelty to make it attractive. He had never talked with a woman outside of his own family circle. To be admitted to a lady’s house was in itself an adventure.

Long before the appointed time, the young Hodja – impetuous youth – gathered together his reeds, ink, and sand. With feverish step he wended his way to the house. Lattices covered the windows, a high wall surrounded the garden, and a ponderous gate barred the entrance. Thrice he raised the massive knocker.

“Who is there?” called a voice from within.

“The scribe,” was the reply.

“It is well,” said the porter; the gate was unbarred, and the Hodja permitted to enter. Directly he was ushered into the apartment of his fair client.

The lady welcomed him cordially.

“Ah! Hodja Effendi, I am glad to see you; pray sit down.”

The Hodja nervously pulled out his writing-implements.

“Do not be in such a hurry,” said the lady. “Refresh yourself; take a cup of coffee, smoke a cigarette, and we will write the letter afterwards.”

So he lit a cigarette, drank a cup of coffee, and they fell to talking. Time flew; the minutes seemed like seconds, and the hours were as minutes. While they were thus enjoying themselves there suddenly came a heavy knock at the gate.

“It is my husband, the Pasha,” cried the lady. “What shall I do? If he finds you here, he will kill you! I am so frightened.”

The Hodja was frightened too. Again there came a knock at the gate.

“I have it,” and taking Abdul by the arm, she said, “you must get into the box,” indicating a large chest in the room. “Quick, quick, if you prize your life utter not a word, and Inshallah I will save you.”

Abdul now, too late, saw his folly. It was his want of experience; but driven by the sense of danger, he entered the chest; the lady locked it and took the key.

A moment afterwards the Pasha came in.

“I am very tired,” he said; “bring me coffee and a chibook.”

“Good evening, Pasha Effendi,” said the lady. “Sit down. I have something to tell you.”

“Bah!” said the Pasha; “I want none of your woman’s talk; ‘the hair of woman is long, and
her wits are short,’ says the proverb. Bring me my pipe.”

“But, Pasha Effendi,” said the lady, “I have had an adventure to-day.”

“Bah!” said the Pasha; “what adventure can a woman have – forgot to paint your eyebrows or color your nails, I suppose.”

“No, Pasha Effendi. Be patient, and I will tell you. I went out today to write a letter.”

“A letter?” said the Pasha; “to whom would you write a letter?”

“Be patient,” she said, “and I will tell you my story. So I came to the box of a young scribe with beautiful eyes.”

“A young man with beautiful eyes,” shouted the Pasha. “Where is he? I’ll kill him!” and he drew his sword.

The Hodja in the chest heard every word and trembled in every limb.

“Be patient, Pasha Effendi; I said I had an adventure, and you did not believe me. I told the young man that the letter was long, and I could not stand in the street to write it. So I asked him to come and see me this afternoon.”

“Here? to this house?” thundered the Pasha.

“Yes, Pasha Effendi,” said the lady. “So the Hodja came here, and I gave him coffee and a cigarette, and we talked, and the minutes seemed like seconds, and the hours were as minutes. All at once came your knock at the gate, and I said to the Hodja, ‘That is the Pasha; and if he finds you here, he will kill you.'”

“And I will kill him,” screamed the Pasha, “where is he?”

“Be patient, Pasha Effendi,” said the lady, “and I will tell you. When you knocked a second time, I suddenly thought of the chest, and I put the Hodja in.”

“O Pasha,” she said, “what a hurry you are in to slay this comely youth. He is your prey; he cannot escape you. The youth is not only in the chest, but it is locked, and the key is in my pocket. Here it is.”

The lady walked over to the Pasha, stretched out her hand and gave him the key.

As he took it, she said:

“Bah!” said the Pasha, in disgust. He threw the key on the floor and left the harem, slamming the door behind him.

After he had gone, the lady took up the key, unlocked the door, and let out the trembling Hodja.

“Go now, Hodja, to your box,” she said. “Take down your sign and write instead: ‘The wit of woman is twofold the wit of man,’ for I am a woman, and in one day I have fooled two men.”