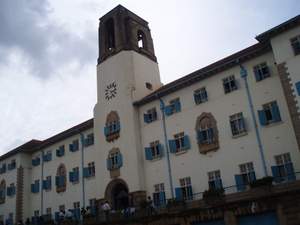 Sensei called it kyoka suigetsu; flower in the mirror, moon on the water. She summed up what I felt that night after Japanese class when we said our goodbyes. Solid, wise, tree-dotted Makerere immediately enveloped me in the gold-leaf of the security lamps keeping watch over her stately scholars. She sighed a chilly breeze that collided with the cracked day-heated tarmac beneath me, sheltering me in a cocoon of equal parts warmth and chill.

My mind was a riot of strange information. Konnichiwa got entangled with her twin Konbawa as their cousin Oyasuminasai looked on in bemusement. I said Sayonara to the whole lot before my brain got fried. Sensei said it will get easier with time. She called it yoko meshi: the stress of speaking a foreign language. I think I will stick to my Luganda until the next class.

At the huge gates, I said my goodbyes to Makerere: the great university loomed behind me like an all-knowing parent. She knew I would soon return. I always did. Tuxedoed marabou storks, perched on the various meticulously labelled exotic trees dotting the spacious campus, gazed at me fearlessly. I inhaled the lingering whiff of their pristine white bio-hazardous excrement spattered on the pavement before I set off. Makerere settled in for the night, one eye ever open, ever vigilant.

I looked up at the sorrowful night-sky. The moon’s pale lips and round pockmarked face were sublime. An orchestra of traffic flowed through the Wandegeya junction, tugged at my heartstrings. The taxi could wait, I felt I needed to walk alongside this matrix of my life’s blood. Kampala looked dashing that night. Like a bashful bride on her wedding night.

I put one well-travelled foot in front of the other and soon set a soldier’s pace…. left, right, left right…. The buildings in the old Indian-style facade waved at me like old pals. They knew a younger version of me who used to dash between them in my haste to reach the Buganda Road flats and onwards to Deliverance Church not far off. These comforting buildings used to escort me to Kampala Pentecostal Church where I once attended Hell’s Flames and Heaven’s Gates for the first time and got so frightened that I ran out in the middle of the play and into their welcoming arms.

Sometime last year, these old buildings had sat down alongside Kampala Road and watched a con take place, as always not in position to interfere. It was a night such as this, the only thing out of place being the malicious slice of a white-ghost moon that gleefully followed the events about to take place. My soldier’s pace was interrupted by a stinky, haphazardly attired lumpen who roughly shoved me aside, dashed behind me…. and picked up what was without a doubt an enticingly thick stash of crisp Uganda shilling bills.

I watched him pick up the money and in that moment deceit took a foothold in my youthful heart. Kampala road looked at me disapprovingly but I was already wetting my fingertips—peeling and counting the crisp notes in my mind.

He looked at me incredulously. He looked torn, undecided on whether to give me the money or make a run for it. I sized him up with a predator’s eye, my muscles humming with hidden reserves of strength. My high school days in track and field were behind me but I felt confident I could outrun this skeletal excuse of a man in a short burst of speed.

But the elements did not approve and voiced their concern. A gust of wind blew and the corrugated iron sheets atop the old buildings rattled in support. Kampala Road whined in disagreement with each vehicle that zoomed past.

I could afford not to listen to my old friends that night. So much was at stake. The man seemed to make up his mind, he walked right up to me and beseeched me to share the spoils with him. He pulled at my arm, quickly drew me away from the watchful eye of Kampala Road and the old buildings that I knew as friends. The matter at hand demanded the utmost secrecy. He knew just the place.

He led me farther and farther away. The few security lamps still functioning flickered on and off. He led me to an alley that smelled strongly of refuse and decadence. He led me deeper into the mistake I had stepped into and I instinctively foresaw the events that took place not soon after. Away from the sanity and uprightness that is Kampala Road, my mind got muddled with the new disturbing sights I saw. The boarded-up grime-stained windows hid from curious eyes the malice swirling in the putrid air. The angry graffiti jostling for space on the walls of the rundown buildings forbade intrusion in the strongest possible terms. The empty trash-littered streets warned me to turn back and flee. But I was too invested in the con at hand, I could not turn back and make a run for it. And the cotton in my ears prevented me from hearing the hint of caution in the wind that drummed an eerie beat on the rusted tin roofs.

Suddenly, a hooded shadow ambushed me on my blind side. I was so surprised, I did not voice alarm. As the second shadow jumped me when I turned to fight off the first, I knew what a terrible mistake it had been to wander off with a stranger – who soon joined his accomplices in pummelling me – in the middle of the night. I screamed myself hoarse but I was unfortunately too far away from humanity to solicit any help. The road beneath me was too potholed and worn to lend me the strength I needed to run. I bled onto that unforgiving tarmac. I lost a tooth and both my shoes in the scuffle that followed. My wallet changed sides as we fought it out on the slippery ground.

And then, as suddenly as it had begun it was all over. The thugs melted into the woodwork of the lopsided shacks and abandoned office blocks. The buildings cast me sinister glances as I looked around trying to get my bearings, convincing me they were part of the ruse.

Bloodied and robbed and with my ego bruised, I took one agonising step after another, firm in my resolve to create as much distance between me and this dark side of Kampala that I had never before been witness to. I set a soldier’s pace….left, right, left, right.…until I made my way back to Kampala Road where the streets were still bathed in the gold-leaf of the overhead security lamps and the matrix of my life-blood pulsated in joy once again.

I was a prodigal child returned into her embrace. My belief in the goodness of man was instantly restored – concerned passers-by rushed to my aid, frantic phone calls were made, a Samaritan availed his Toyota Corolla and I was quickly whisked away to Norvik Hospital a few blocks from where I was found. My old friends mourned at the sight of me. They welcomed me back into their embrace and nursed me back to health. Within no time I was back on my feet, a few scars the only reminder of what had transpired that night.

From that day onwards, I solemnly swore never to stray too far from the love of my life ever again. Not at night. Kampala Road it would be for me. 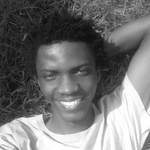 Sydney Mugerwa was born in Kampala into a family environment which involved a good deal of moving around. This made for a rather erratic social life and Sydney and his brothers and sisters spent a good deal of time devising their own indoor games to pass the time. The discovery of Ladybird books proved a watershed in Sydney’s life and set him on the path of reading which he has been following ever since. He dabbles in writing prose and poetry.