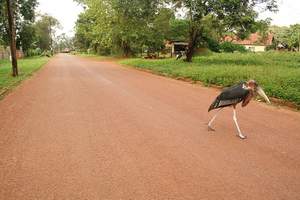 My father’s funeral was on a Friday. I learned this during the phone call from my sister the preceding Wednesday. I wasn’t surprised that the service would occur so soon after my father’s passing. He was not one to delay any family business. He had brought to an end our unhappy relationship with that characteristic haste. My connection with him since had been maintained by my older sister. She was the hub that kept the spokes of the wheel of our family together – even if some of them were bent.

The funeral was held at our old family church, a few kilometers down a winding red dirt road outside of the town of Jinja. I noticed my car now carried that tinge of red dust that had clung to it after the drive. Ten seasons had passed since I had last set foot in the front entrance. It still looked as it did when I last left it, except that our pastor’s head had turned almost white and a wooden coffin lay under the altar. The church was full of people milling about, finding seats or sharing whispered conversations before the funeral was to begin. I recognized my sister and she lit up as she spotted me and waved me over. She hugged me tightly. Ten years couldn’t erase the recognition between us.

“I’m glad you could make it,” she said, “I wasn’t sure you would come when I called you.”

“I guess I had to since I am family… plus you asked me to come,” I said.

“Well… it’s good to see you… I think Dad would have… appreciated it.”

At that moment, her eyes seemed to search for some emotion in my face. I tried to keep mine as blank as possible. I didn’t respond. My sister sighed. She gave my arm a last squeeze before disappearing into the crowd.

I was alone in a sea of faces. I recognized a few of them but no one seemed to notice who I was just yet. My mind drifted back to the last time I saw my father. It hadn’t been pleasant. We had blamed each, sayings that we couldn’t take back now. I remember his words as if it had just happened. I was 18 at the time and had finally had the courage to stand up to him.

“Your attitude is poor, son,” my father had said, “you need to correct it if you want to succeed in life.”

“Well, you weren’t exactly a good example yourself!” I said.

He stood as if I had struck him. The surprise registered on his face. He recovered.

“What do you mean? I sacrificed for this family. Your mother sacrificed too and you don’t seem to care.”

“Yes you both sacrificed. I know this but you were never there for all of us. Did you know that Mother wanted to leave you once after all those times that you came home drunk and yelled at her?”

“Don’t you talk about your mother! She was a good person, rest her soul, and you shouldn’t talk about her like that.”

“I’m her son and I loved her too. But I wish I had stood up to you. Maybe she wouldn’t have killed herself then.”

I saw his eyes blaze with anger. I thought he would strike me, as he had done in the past, but he just stood before me with clenched fists. My body shook as if I had been hit with a fever. I stood my ground this time. This time it would be different. Maybe that is why he didn’t hit me – or maybe it was because I was now his size and couldn’t be knocked down as easily as before. I don’t know the answer but he just stood there.

“I don’t ever want to see you again. You are not my son!”

These were the last words we had spoken to each other. I walked out of the front door and out of my family members’ lives. I felt a tinge of sadness then. I saw a sign saying I was leaving the source of the Nile River. In a way, I was leaving the original source of my own life behind. For the next ten years, I finished university in Kampala, had several jobs and moved around the country. My only link to the past was through occasional phone conversations with my older sister, who filled me in on family news and enquired as to how things were going in my life. I never asked about my father.

My life had become stable with its own rhythms of existence that were separate from the one I grew up in. This new life had become a new layer of skin for me and I drew comfort from it as I adapted to it. I even learned to enjoy it. This protective shell was whole and complete – until the day I picked up the call from my sister and learned of my father’s death.

Now I was back in the home that was mine a long time ago when I was still afraid of my own shadow and especially of my father. My mother was my sole comfort back then. She was my protector from my father’s rages and his quiet indifference to what happened in the house. Things became worse after my father’s grocery store had to close. Having to go around town to beg for odd jobs from a few of his old customers was tough on him, I’m sure. My Dad became a stranger to me.

The testimonies started with an old man who spoke with a gravelly voice, whose words seemed to break apart upon the stones within his throat. His eyes began to glisten as he spoke. He spoke of my father’s kindness and how one day, while begging for stale bread, the man instead received several loaves from from my father, to take home to his family. That was just the beginning. One young man spoke of how my father gave him a badly needed job at our store in town when his own father fell ill. On they went. The shock of these remembrances overwhelmed me. I was being pummelled by these acts of kindness recounted about someone who seemed to show so little kindness to those closest to him.

After the close of the service, some of those very same people who had spoken sought out my sister to thank her. They said they could no longer thank my father but they could thank his daughter. Afterwards, I approached my sister.

“Did you know about what Dad did for these people?” I asked.

“I knew about some of them. The ones he told me about,” she said.

“That was Dad’s style I guess. He was always humble in his own way.”

“I just don’t understand… why was he so nice to them and not us?”

“I’ve thought about that too all these years and I don’t really know why. Maybe he gave all his love to strangers rather than to his own family… we’ll never know now.”

We chatted some more about our own lives before parting. I got into my car for the long drive home, back to the noise and chaos of Kampala. The late afternoon sun beat down on my car as I drove through rolling waves of green tea plantation. Relief came as I passed into the cool shade of Mabira Forest – one of the few natural forests left standing in this part of Uganda, a forest that still clung to some life. Life. Life was strange. I struggled to grasp what I had experienced but found that the answer slipped away like water running through fingers. Maybe the love that escaped our family lived in others that we never really knew? Rather than trying to understand it, maybe it was better just to accept it – like when a flood comes and takes away a family’s house for no reason. It just is. Like myself, I just am. I am my father’s son.